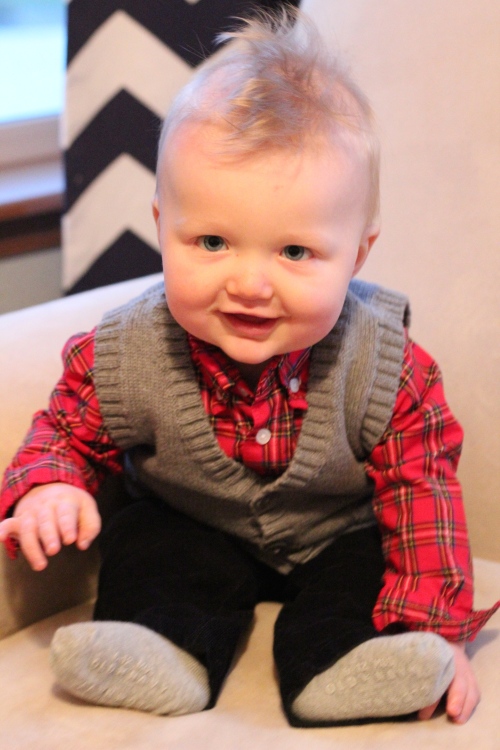 This. Guy. When we found out that we were going to have a little boy last Christmas, my first thoughts were, “how am I going to know what to do with a boy?!” (I come from a family of three girls—so I feel I understand girls pretty well. Boys… not so much…) But from the day Gavyn was born, I was smitten. He’s a mama’s boy, which is nice since Madalyn is all about her daddy, and he already has me wrapped around his little finger. Gavyn is the most precious little boy around and the perfect addition to our family. God so knew what He was doing by placing him into our arms (when does He not, right?)!

We have been blessed with two beautiful, healthy children, and we really do not take that for granted. Both Madalyn and Gavyn have been “easy” babies and great sleepers, which we also do not take for granted. However, we recently found ourselves having to make some decisions about the shape of Gavyn’s head. I am sure that most of you either know a baby or have seen a baby that has had to wear a Doc Band, or some other cranial shaping band, as this has become a common issue arising from the “back-to-sleep” push, amongst other things.

When Gavyn was two months old, our pediatrician noticed that one side of head seemed flatter than the other. We did whatever we possibly could to keep him off the back of his head for the next two months. We limited his time in his bouncy seat and even his car seat. However, Gavyn has been a good sleeper so the majority of his day he still spent sleeping, on his back in his crib, and therefore flat on his head. Because the one side of his head was more flat, his head automatically would just rest on that side more often. We could correct this during nap time by rotating his head, but we couldn’t stay up all night doing that. At his four month well check appointment, his pediatrician thought our efforts had paid off and his head looked more even, but when we went in for his six month appointment, she recommended that we get some measurements taken of his head, just to be sure.

At this point, I wasn’t really thinking too hard about any of this. Gavyn’s doctor didn’t really seem super concerned about it, and while we could visibly notice his head wasn’t perfectly round, it wasn’t as if it was severe. I knew his head was still growing, so I hoped that it would just continue to correct on its own, especially as Gavyn was now spending hardly any time on his back since he switched to sleeping on his stomach and also playing on his stomach most of the day.

When we went for his measurements, the therapist we met with said that Gavyn was definitely a candidate for the Doc Band. Gavyn had plagiocephaly (flatness on one side of the head) and also brachycephaly (overall flatness on the back of his head). He didn’t have any facial asymmetry because of the plagiocephaly and he also didn’t have any issues with torticollis, which is also a common concern. Bryan and I were still unsure at this point. We were skeptical that this was the only way to “fix” what was going on with his head. Again, we were still hopeful that it would correct on its own and because this is really purely a cosmetic issue, it seemed like a huge expense and effort to take on just to make his head more “pretty.” Gavyn would need to wear the helmet for 12 weeks, 23 hours a day (the one hour break per day is for cleaning the Band and washing Gavyn’s head and hair), and the cost was in the thousands, and an uncertainty about what and if insurance would cover any of that cost. We talked to some friends that we knew that had had babies go through the Doc Band process, we read articles, we talked to other doctors we knew (those both for and against the Doc Band) and we got a second opinion. Ultimately, we chose to proceed with the Doc Band.

I write this post, because yes, Gavyn is healthy and we are so thankful for that, but this was really a big decision for us. We chose to do the Band because we, as Gavyn’s parents, wanted to be sure that we tried as much as we could, for his sake. He is a boy, and I might have made a different decision if he was a girl, so his hair will likely be shorter and the shape of his head more visible. This is one of those situations in life where it is hard to make a decision when you don’t really know the outcome of your decision. Had we chosen not to have him wear the band, his head may have corrected on its own. I knew that I personally would be disappointed if it didn’t and if Gavyn was to ever ask me about it someday, I wanted to be able to tell him that we had tried. Gavyn is also on the older side, being already 8 months old, and older babies’ heads no longer grow quite as fast. We wanted to give him the best chance we could.

Part of the reason this decision was harder for us to make besides the process and the cost, is that I was kind of nervous about what people would think when they saw Gavyn with the Band on. I don’t consider myself to be a vain person, but the Doc Bands are really not something that goes by unnoticed. And yes, we have gotten a few stares and a few strange looks when we have been out with Gavyn and he has had it on, but, instead of feeling sensitive or embarrassed about it, it has really just made me want to squeeze Gavyn closer. On a positive note, we have even had some people come up to us and tell us about how their child or grandchild had to wear the Band, which is nice affirmation!

Gavyn has been a champ about the Band which is not a surprise as he’s pretty easy going, overall.  The worst part of the whole process thus far was definitely the casting process. You can actually skip the casting and do digital images of the head, however this was even more expensive and an hours drive away for us, so we chose to go with the casting. Gavyn only cried for about a minute (if that!) through that whole 15 minute process. (Just don’t ask how close I was to crying through it, though. :)) We had a couple of nights that were rough with sleep as he adjusted, but he is back to sleeping through the night and napping normally. We make sure to keep him in cooler pajamas so he doesn’t get too warm, and he seems to be doing just fine. I think the adjustment was harder for us than it was for him! When Maddy first saw him in his helmet, she said “Buddy’s a football player!” and she still says that several times throughout the day. 😉 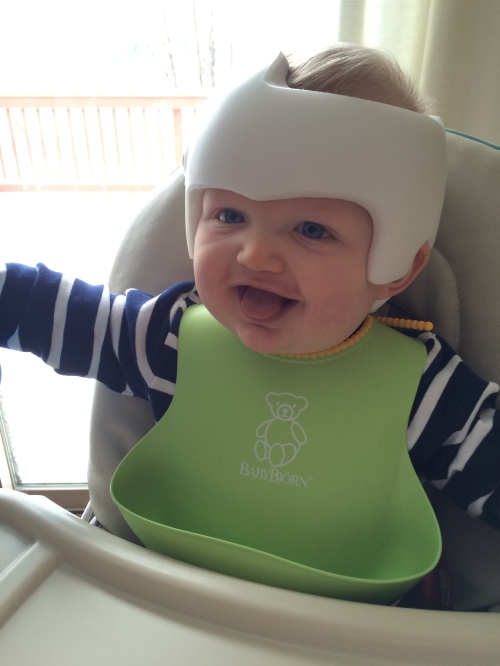 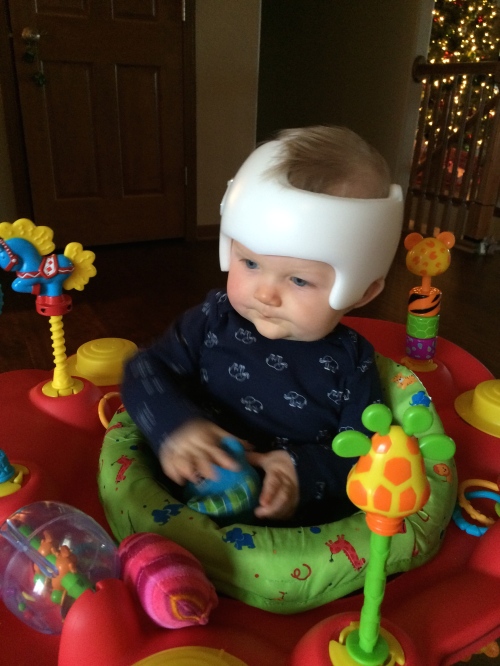 We had Gavyn’s first followup appointment yesterday, which already marks two weeks since he has been wearing the Band, and when we looked at his pictures compared to his head now we can already see a distinctive difference! It was really encouraging to see progress already being made and helps confirm that I think we made the right choice by giving this a try.

As I was reading about Doc Bands on the internet, I found a couple of blog posts that were really encouraging, and so I hope that this might encourage someone else, too. As common as these cranial shaping bands are, I know that they are still so foreign to a lot of people, so hopefully this helps to explain some of it. I also felt some guilt about this whole thing, wondering if there was something I could have done differently to prevent it, but I know that that thinking is not where God wants my mind to be going. I do believe we did what we could, outside of putting him to sleep on his stomach, and while there are going to be strong opinions both ways, I am really at peace with our decision. (P.S. I’m sure all you mamas already know this, but it is SO hard to make decisions for your children when they can’t make them on their own!)

I will be sure to post again in a while and let you know how he is doing! We are also planning to decorate his Band up a bit to make it a little more fun, so I will have some pictures to share about that, too. For now, I just want to share this verse that my heart really held to as we were praying about making the right choice for Gavyn:

“And the peace of God, which transcends all understanding, will guard your hearts and your minds in Christ Jesus.”

I hope you all enjoyed your Christmas and holiday time with family and friends — I know we did!

8 thoughts on “Our Doc Band Journey: Part One”

Hi! I’m Abby and I love organization, crafting and decorating. I'm a wife and a mama and my heart beats for Jesus. I am forever thankful for the gift of life, and I do my best to squeeze as much fun out of it as possible. I hope you enjoy your time here!